First Human Embryos Successfully Edited in the US

The first known attempt at creating genetically modified human embryos in the United States has been carried out by a team of researchers in Portland, Oregon. The effort, led by Shoukhrat Mitalipov of Oregon Health and Science University, involved changing the DNA of a large number of one-cell embryos with the gene-editing technique CRISPR, according to people familiar with the scientific results. Until now, American scientists have watched with a combination of awe, envy, an

Sperm counts of men in North America, Europe, Australia and New Zealand are plunging, according to a new analysis published recently. Among these men there has been a 52% decline in sperm concentration and a 59% decline in total sperm count over a nearly 40-year period ending in 2011, the analysis, published in the journal Human Reproduction Update, said. Scientists determine sperm count by looking at a sample of ejaculate under a microscope. For sperm concentration, they mea

More than one in eight couples of childbearing age have difficulty conceiving or carrying a pregnancy to term, according to the Centers for Disease Control and Prevention (CDC). Experts at the World Health Organization (WHO) and the American Society for Reproductive Medicine (ASRM) have designated infertility a disease. Delegates at the 2017 AMA Annual Meeting voted in support of WHO’s designation of infertility as a disease. The declaration could have a broader impact on ho 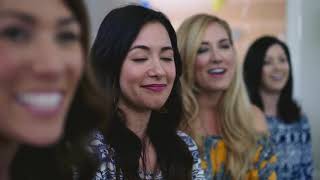 For couples dealing with infertility, the journey to parenthood can be painful, isolating and totally overwhelming. American Greetings decided to shed light on this experience with a new ad, titled “Not Alone.” The video follows a couple struggling to conceive and shows a small way people can support loved ones going through this challenging time. The video, which is part of American Greetings’ “Give Meaning” campaign, has reached more 80,000 views on YouTube and over 1 milli

Antidepressants in pregnancy not tied to intellectual disability in kids

Pregnant women's use of antidepressants does not increase their babies' risk of intellectual disability, a new study suggests. Researchers analyzed data from a large sample of children and found those whose mothers took antidepressant medications while pregnant were no more likely to be diagnosed with intellectual disability than those who weren't exposed to antidepressants in the womb. "There has certainly been a lot of reports about associations between taking medication -

Freezing Ovarian Tissue May Be a Promising Fertility Treatment

By 2018, some 76,000 women in the U.S. will freeze their eggs every year to preserve their fertility and increase their odds of getting pregnant later in life. Yet egg freezing is by no means a solid insurance policy. Some estimates suggest that just under 24% of procedures will result in a live birth. The fertility field is looking for other options. In a new study published in the journal Reproductive Sciences, two fertility experts argue that ovarian tissue freezing—a proc

An experimental test that relies on an old-fashioned screening exam — the pap smear — may someday allow doctors to easily detect birth defects sooner than ever. On Tuesday, Wayne State University (WSU) researchers revealed the latest encouraging findings on their creation, called “Trophoblast Retrieval and Isolation from the Cervix,” or TRIC for short. Using a pap smear, they scraped trophoblasts — the cells that eventually help form a fetus’ placenta — from pregnant women’s

Women who consume too many sugary foods and drinks during pregnancy may be increasing their children's risk of developing an allergy or allergic asthma, according to a study published in the European Respiratory Journal. The researchers looked at allergies that produce respiratory and skin symptoms, including dust mites, cats and grass. "Allergic asthma" causes breathing problems, like wheezing and coughing, in the presence of common allergens such as dust. Researchers from Q